-Lin-Manuel Miranda, excerpt from his acceptance speech
after winning “Best Score” at the 2016 Tony Awards
just 24 hours on the Pulse Nightclub Massacre.

A little over a year ago I had begun to finally understand my sexual orientation. It was a journey that took a long time and, in that moment in time, I was relieved to finally begin to understand who I was. The next step for me was to begin to stop living in fear, publicly “come out”, and claim my truth as a bisexual male. Of course, that eventually happened on December 5, 2016. Though, before I had even picked the date that I wanted to come out on, I almost came out one year ago today in response to the tragedy that occurred in the early morning hours of June 12, 2016.

A year ago this morning I was lying in bed at a rental home in Independence, Missouri. The Community of Christ World Conference had ended the day prior and I was on such a high from that experience. It was a Sunday morning and I was waking up to go to church at a local Community of Christ congregation before flying back home to Oregon. As I turned over to check my phone, I noticed that my notification screen was lit up with news alerts about a mass shooting at a gay nightclub in Florida. I was numb. I was angry. I was sad. It wasn’t just an attack on a random group of people. It was a targeted, deliberate attack on a population that I identify with. This was personal. For on the verge of publicly claiming the truth of my own sexual orientation, I was again reminded why so many live in fear of simply being who they are. I was reminded that living one’s truth as being LGBT can still, even in 2016, cause one to feel unsafe. As someone who puts the “B” in LGBT, I was also reminded why others who claim this same orientation as I, might choose to just focus on their attraction to the opposite sex and deny their own attraction to the same sex. I know I did for a long time. I was also reminded why others who are a part of the LGBT spectrum may decide to never come out at all. 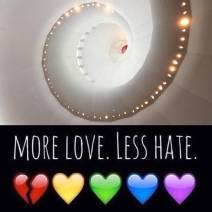 Today is a day to read the names of those who died and remember them, even if only in name. It is a day to remember that even though society has progressed in so many ways in accepting the rights of this beautiful population of people, that we can’t allow that progress to blind us or slow us down from continuing the journey towards full inclusion in our culture today. For as John Legend sang in the song “If you’re out there”: “The future started yesterday and we’re already late.” So let’s look hate in the face and say, “That’s it. You’re done!”. Let us embody the love of God by loving our neighbors as we should love ourselves. And remember, people can change their beliefs and attitudes but they can’t change who they are.

I would be remiss if I didn’t highlight the fact that today is also Loving Day. A day where we celebrate the 50th Anniversary of the Supreme Court’s decision to strike down state laws that banned interracial marriage. Yet another example of the struggle our culture has had with labeling certain relationships as sinful or wrong when they don’t match that of the dominate population in society. May this be yet another reminder of our continual need to tirelessly work towards equality for all people.

I close today’s blog entry with this sacred text found in Community of Christ scriptures:

You do not fully understand many interrelated processes of human creation. Through its wonderful complexity, creation produces diversity and order.

Be not consumed with concern about variety in human types and characteristics as you see them. Be passionately concerned about forming inclusive communities of love, oneness, and equality that reveal divine nature.

Be passionately concerned about forming inclusive communities of love, oneness, and equality… I like that. I value that. Let’s live it. Let’s build it. In many ways, the lives of people you love depend on it. So as we celebrate how far we’ve come, let us find and create hope in the journey for where we are called to go.

A list of those killed at the Pulse Nightclub in Orlando, Florida, on June 12, 2016:

May we remember and honor them. May we continue to lift up in prayer and thought the loved ones they left behind as well as the over fifty additional people who were injured on that day.

2 thoughts on “A Year Later: Orlando, Equality, and the Journey Forward”

The posts on this page do no necessarily represent the views of Community of Christ. This is a personal blog that explores issues that relevant and important to Sean.